Les Sables d'Olonne - Bookends on a Winter a of Transition

Les Sables d'Olonne.  I was disappointed that I'd made the choice to return to a place I've already been (after all, there's A LOT of France still to see), but on my second day walking along the beach, I realized that my two trips here were the perfect bookends on a challenging winter of adjustment. 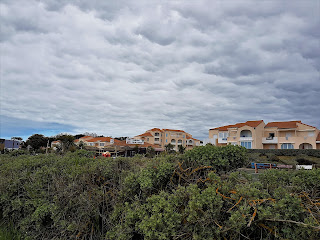 The neighboring town I stayed in

When I was here last, I still felt I had something to prove.  To whom, I don't know, but I felt that I had to prove this was the right decision, that I didn't just move here on a whim.  I had to make friends, especially French ones . . . maybe find a boyfriend too in order to really assimilate.  I had to sink down roots, become fluent in the language, figure it all out.

I no longer feel that way.  Moving here has mostly been a great adventure.  Even if I only stay a year, two years, it wasn't a mistake to come - it was a dream for 10 years that I finally fulfilled. 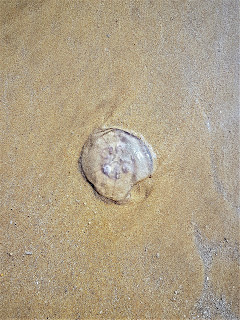 And life in France shares some things with life in the US - it's still life and can be just as unexpected.  The person I thought I'd be great friends with divorced and moved away.  A friendship that I thought would be brief, due to a large age difference, has instead become a solid friendship that is going on 6 months now.  I just met his parents and he announced to them that he hopes to do his foreign apprenticeship near my hometown next summer, even though it means switching from the food division to hard cider.

I understand more of the common phrases said around me as well. "C'est bon" - it's good.  "Ce pas grave" - it's no big deal, it's not important.  "Le même" - the same.  "Ce comme ça" - it's like that.  I understood enough to survive dinner with four French people, who don't speak much English, without needing constant help.  Even if all of the details weren't clear, I could pick up talk about the elections, the migrant camp burning down and them asking him if he had difficulty communicating with me ("no").  It helped to learn he'd done very poorly in English until recently, meaning he became fluent as a adult, so surely I can too! 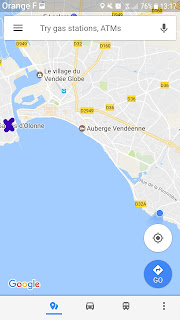 As for my actual weekend, it started with a bit of a disappointment.  Even though the ad stated where the flat was, I didn't know the town and so I looked at the map on the site.  The blue "x" represents where the map showed the property . . . the blue dot is where it actually is.  In typical fashion, I made the best of it and set out on the lovely path that continued all the way into Les Sables d'Olonne.  The below photo gives a visual of the distance - it's the city wrapping around the curve! 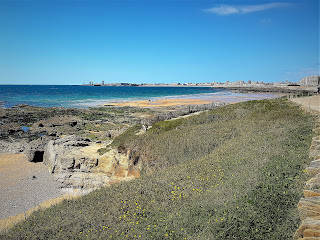 Even though I prefer to walk on a sandy beach, the rocky shorelines are often visually prettier and make for better photos, so I really did enjoy the walk in every day (less the walk back though)! 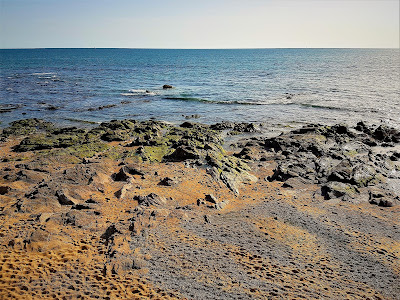 Saturday was actually the best day on the beach.  There were surprisingly few people for it being a holiday weekend, so I walked for a while, then sat against the sea wall (there are lower sections and many people sit on or against them and read for a little bit.  If you're looking for a nice coastal town with a lovely beach to just relax on, this is a great place for it!  It also has the best boardwalk area of the towns I've seen - a nice broad pedestrian portion, designated bike lane (a full car lane split in two) and one lane for traffic, although this was closed off on Easter due to the high number of pedestrians. 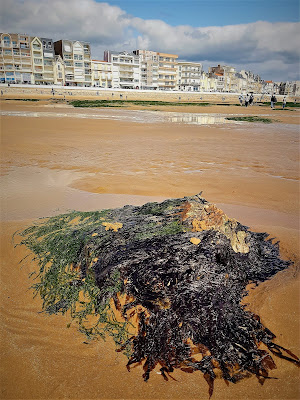 I don't find Les Sables d'Olonne to be one of the French towns with particular cultural or historic interest (I'm sure a French person could tell me all about why I'm wrong), so I've decided that my long weekends will be spent elsewhere in the future . . . but for a normal weekend getaway, this is still a place that I can imagine owning a "weekend flat!" 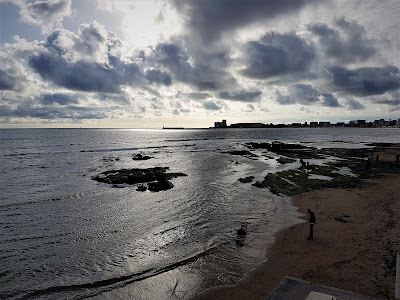 Dealing with the Expat Blues

When you're living in a gorgeous country and you like most things about it, it can be difficult to admit or acknowledge when things simply aren't going well.

There are cultural differences between the US and France, but the ones that get you in trouble are the ones that aren't as obvious and you don't know about.  The issue largely happens to me when the same behavior is assumed to have two completely different motivations in the two countries. 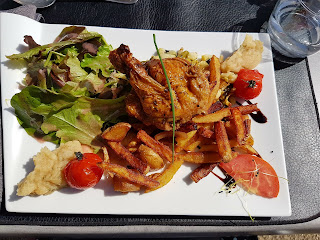 When these things happen, it's easy to miss home.  Obviously, there can be misunderstandings that happen in your home country too, but not usually over things that are normal behavior in your country.  The problem here is when you do something completely normal and somebody is upset about it because, well, it's not normal here.

My natural tendency is to gloss over these things.  Usually, it's small and passing, plus what right do I have to complain?  I'm "living the dream after all" and I moved here voluntarily.  I have a good job, live in a nice (albeit old) home and have even managed to make some friends. 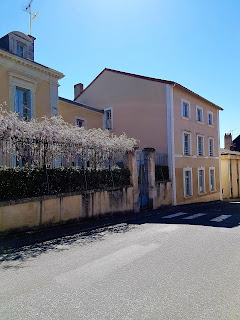 There are still times when it seems like EVERYTHING is going wrong though.  Such as: 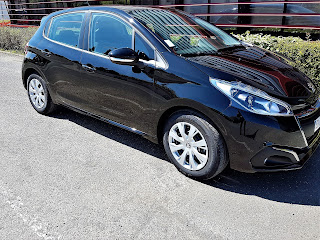 Ok, so it doesn't look that bad in black . . . black is considered a "distinguished" color here, so I suppose it works for a cadre

While there is nothing major that went wrong, when it feels like many small things are going wrong due to cultural differences, language barriers, etc. it can be tempting to consider packing up and moving back.  Just considering it put me in an even worse mood though.

Since I knew I wasn't ready to return to the US, it was time to deal with the "blues" head-on!  Here's what worked for me: 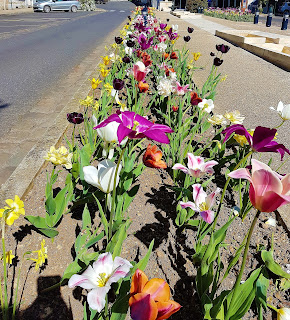 These are some of the same things that worked for me the last time - get some exercise, focus on the positive things about living in France, socialize with friends in both countries and cut myself (and the French) some slack when it comes to language and culture issues.  If you're also an Expat who is having a low moment, I hope these same ideas may work for you!
Posted by Unknown at 12:00 PM No comments:

A Random Road Trip in France

I'm quickly learning that a real "plan" is perhaps not necessary in order to see beautiful things in France - you can just pick a random place and go.

In this case, my only plan was "let's do something" and Alexis took charge!  He wanted a town that was new for both of us, so slightly south of La Rochelle, he made lunch reservations in Rochefort.  While prices are a little steep near the coast, the lunch was excellent.  I was jealous when his cake came out, but it turned out that my mascarpone was divine, absolutely divine!

We took a little walk around Rochefort, which I realized was the city where the Hermoine replica boat is.  The Hermoine was originally sent by France to help the Americans in the American Revolution (for those who've forgotten, the French originally helped us win a war).  A replica was built and it sailed to the US and back in 2015, but the ship remains in Rochefort and can be toured.  There was no tour for us, but I have a lovely photo with it! 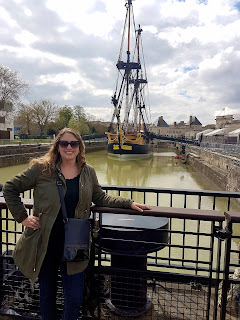 After a brief walk around the town (and the purchase of two French books much more suitable for my current reading level), we decided that this wasn't ACTUALLY the beach, looked at the map, and decided that this tiny finger of land looked interesting to see.  We didn't see the island out in the water (or paid no attention to it) until we arrived at the end and people were walking out onto a raised "road" across the tidal flats. 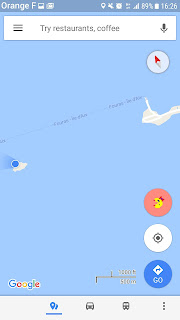 When we first entered the town, I was surprised by the resemblance to other French coastal towns that I've seen - it reminded me a little of the outer portion of Biarritz (clearly, nothing like the main town there though).  As you can see from the location of the blue dot on the map, after arriving in the town and going to the very end of the tip, we decided to head out to see the fort.  The tide was out when we started, stranding this fisherman's hut far from the water!  I had no idea what it even was, so having a Frenchie along was quite useful. 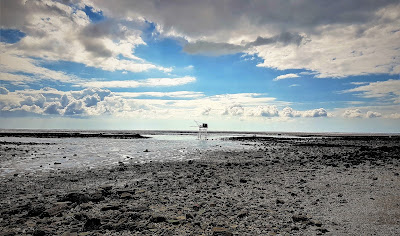 Even though we were about halfway across when the tide clearly started coming in, we were on a mission to make it to the fort!  Despite the fact that all of the people with oyster buckets were clearly headed in the other direction, Alexis was confident that we wouldn't get trapped, so I took his word for it and kept going (to be fair, we had cell service, so it couldn't be THAT difficult to get a boat out there if needed).  It turns out, it's about a 30 minute walk out to the fort over a road that has disintegrated badly over the years; however, it's great exercise and lovely views all along the way. 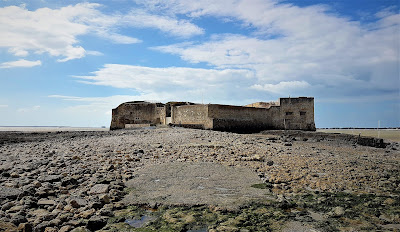 I haven't really tried just picking a random spot on the map before and going there, but it turned out to be a fun idea.  I saw my first oyster farms, a random abandoned fort and the island had lovely views of the bridges from the coast out to the two big islands in the area . . . plus it was kind of cool to WALK out to a spot shown as an island in the middle of the ocean on a map.  To get a feel for the distance, in the photo below that white dot is a van - look past it on the horizon and you can see the buildings where the car park is. 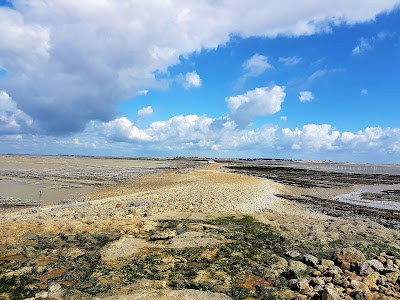 And not a photo from the road trip, but rather just a typical Saturday afternoon in France from the day before.  There are certain parts of living in France that are EXACTLY what you expect.  The French cafe scene is one of those things!  People really do just sit (even on the same side of the table), chat and just watch the world go by.  Truly one of my favorite things about French culture! 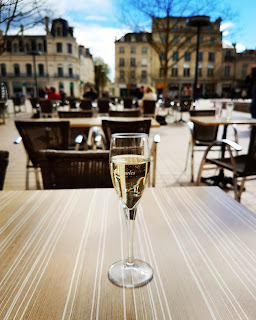