It took me about 2 weeks to really settle back into life in the US, which makes me wonder if I'll ever really feel settled here when I come back to visit?

Yes, that's correct - visit.  My company has authorized starting immigration proceedings with the intent that I will transfer to France (with a promotion) in September or October of this year!  This is hardly a fast or easy process for those not familiar with it.


So, we have the official approval to proceed with step one of this whole process, which is expected to take 2-3 months.  Of course, the fact that France basically shuts down for the month of August may also complicate things.

On a personal level, I've started to sort through all of the things I don't use on a day-to-day basis to make a toss/donate/pack decision.  Since it's expected to be a 3 to 5 year commitment, I'm trying to avoid storing anything here and I kind of like using this as an opportunity to go minimalist!  The pile of stuff I'm getting rid of is already 3 times larger than what I'm planning to pack and keep.  I am realizing that I'll have quite a bill to replace all of my electrical items though! 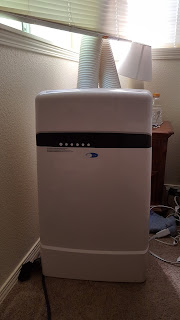 Anyone need a 110V portable air conditioner???
Posted by Unknown at 9:09 PM No comments:

Email ThisBlogThis!Share to TwitterShare to FacebookShare to Pinterest
Labels: American Ex-Pat in France, Immigrating to France, Working in France

Returning to the US

I had combed through some ex-pat blogs as my return to the US was coming up and I was curious what the experience of others had been.  While my first trip abroad certainly expanded my worldview, subsequent trips to places like Guatemala and Egypt had further changed the way I see the world and people around me.

I can tell you that this is nothing compared to a return home after living abroad for several months.  My prior trips had taught me, first, that the US worldview is not shared globally and had challenged me to question the way world events are reported (or not, as the case may be) based on how I saw the same events reported and perceived in other countries.  I also saw how differently world history is taught, although, admittedly other countries have the same tendency to focus on their part.  For example, WWII is heavy on Pearl Harbor in the US, but Pearl Harbor is a blip on the radar in WWII sites in Europe.  Where the US tends to bury its own Antisemitic and Eugenics history, Western Europe tends to openly own theirs and challenges people not to repeat the mistakes of the past.

My trips to Guatemala and Egypt helped me to better understand the level of desperation that would result in people risking their lives to cross deserts or oceans in the hope of a better life - the hope of having adequate shelter, being able to feed their children, to not worry about their house flooding each time it rains.  When you're shown where the "rich" people live and it's basically a standard US ranch home on maybe a 1/4 acre, it really drives home that most of us in the US are wealthy by global standards - that the "rich" in many countries live in poorer conditions than the lower-middle class in the US.  In fact, the "middle class" in many countries live in areas we'd refer to as "slums" here.  Only someone lacking empathy could fail to feel compassion for those who lack our opportunities merely due to the country they were born in. 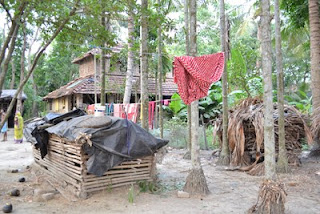 Common housing in an area that I sponsor children in

This adjustment has been even more challenging so far.  Right now, everything feels unfamiliar to me.  My car has more responsive gas, brakes and steering, which has me peeling out and braking hard on accident.  I also keep trying to shift and clutch.  My house also feels unfamiliar - I'd forgotten my new neighbors have two dogs that bark constantly; I learned in my one day home that they also fight, slam doors and curse at each other from outside the open front door (fortunately, I can't hear much of what goes on inside the apartment unless they're close to the shared wall).  I've acquired a new neighbor in my building who drives the car parked next to mine.  I can't remember where all of my things are (primarily those I use infrequently) and I open drawers and am surprised by the contents.  I reach out for my phone to the left of my bed, where it was in France, rather than the right.  I'm having to adjust to turning lights on by flipping switches up instead of down.  I haven't experienced the same sense of not feeling at home that longer term ex-pats describe, but I certainly feel just slightly out-of-place.

After so long away, you don't only notice the big cultural things, but the small ones also.  How Americans rush through eating - barely swallowing before shoving the next bite in and surely not taking the time to really savor the taste of their food (for good reason in some cases) and how we're also rushed through eating by servers, with the next course appearing before the last is finished and the check showing up while you're still halfway through dinner.  Also, I've noticed how aggressively entitled we are when driving - god forbid you're in somebody's way when they're in a hurry, but if somebody wants to drive slowly in the left lane, well they have the "right" to drive there and you can just wait!  I miss the orderly system of driving right and passing left in France!  Driving here is much more anxiety-inducing and frustrating.

You also realize how loud Americans are.  In France, it's rare to really overhear a full conversation from another table and even more rare that any sort of music is playing above a very low volume.  Most rail cars are quiet cars and you step out into the connecting area to take calls, meaning we don't all get to hear the intimate details of people's personal lives.  French people also are much less inclined to talk just to hear themselves talk.  You realize upon returning to the US that people loudly tell stories about things they're incensed about because it seems they want to be overheard and for others to share in their outrage - not that I think people realize this or do it consciously, but it's clear when you observe it from the outside; the way someone will tell the story about the trashy girl their ex is dating and how his WHOLE family hates her and can't believe he left you, then they subtly look around at others as if gauging whether perfect strangers agree that this is appalling.

And yes, this is a true example of a conversation that loudly took place near me in my one day of being back in the US.  I also heard another one about somebody cheating, a mom making underhanded comments about how it must be difficult for her daughter to adjust back to a normal schedule after a week with her dad with "no rules, no bedtime, getting to eat whatever she wanted," about the girl and her boyfriend who keep breaking up and getting back together and people arguing about whether or not the inappropriate story a man was telling was acceptable given the place wasn't "classy" to begin with.  All in less than 24 hours.  We're loud, folks.  And we apparently don't care if strangers around us hear the intimate personal details of our lives whether they want to our not (and trust me, I didn't).

This isn't to say everything is better in France.  It's much more common here that we'll strike up a conversation with a stranger about our flight delay and commiserate together over it - even watch each other's luggage for restroom breaks after.  Or discover you're both continuing on to Portland and the more experienced International traveler (me) will assist the other in clearing all the re-entry hurdles, forming a brief friendship of sorts.  The French are much more stand-offish when it comes to strangers, so these things are not typical there; however, if you're a woman with heavy luggage, you can expect French men will volunteer to carry it up stairs and load/unload it from the train for you, they just won't expect this to turn into a conversation after.  They help and are on their way. 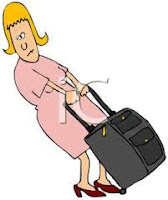 The French also don't talk just to be polite beyond "Bonjour."  Whereas we're expected to ask, "how are you?" With an expected response of, "Fine" or "Good" and to remember various personal things about co-workers, like how many kids they have, approximate ages, pets, that Fluffy had surgery recently, etc. whether we actually care or even like the person, this is not the French way.  If a French person asks how you're doing, they actually care.  If they ask what you're doing for the weekend or where you're going on vacation, it isn't polite small talk, but expresses an actual interest in how you spend your time - in other words, something you'd ask a co-worker who's also a friend or you're friendly with, but not every person you work with.  In fact, if you ask and aren't personally friendly, it's viewed as invasive and likely won't be answered - hence the perception by both cultures that the others are rude.  Which culture is better probably depends on the person, but as a slight introvert, once I understood the "why" behind the French way, I found it rather freeing that there was no expectation that I show an interest in the personal lives of people I barely know.  It was also more meaningful when somebody did volunteer info about their family or vacation or weekend because it indicates you've become friendly outside just "co-workers."  While it might be rude by US standards not to feign a polite interest in people you really don't care about, at least the French are keeping it real!

The US has one strong positive going for it in my book though - crispy bacon!  Bet you can guess what my first American breakfast included!  Oh, and my memory foam bed welcomed me home in the best way possible - if I ever relocate, the one piece of furniture that is for sure going with me is that bed!  Most comfortable bed I've ever slept on!
Posted by Unknown at 2:31 PM No comments: